Is The Spanish From Spain Different From Other Countries?

Spanish is spoken by more than 450 million people and the question I am asked quite often is whether it is the same in all the countries where the language is spoken. As with every language spoken by different nations, the language undergoes variations. 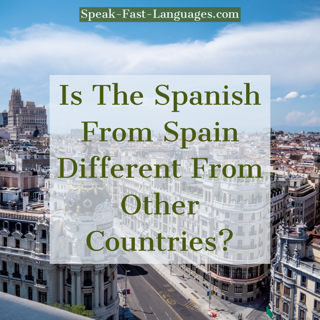 The Spanish spoken in Spain is also called ‘Castellano’ due to its origin. It came from Latin. It spread throughout the Iberia Peninsula. During the expansion of the Spanish empire, it became the language of the new colonies.

After various centuries it is understandable that the language has evolved in the former colonies if we bear in mind the effect of social influence on the language. Each country has its own history and has undergone different growth. Even within the same country factors as social condition, gender ethnicity, education, are also to be taken into consideration.

So, how many types of Spanish do exist?

The answer is one. If you put in a room individuals from Spain, Peru, Argentina, Mexico, and Dominican Republic, they will easily hold a conversation for hours despite their different accents. They might wonder at times what an expression means, but they will quickly grab its meaning in context.

With this out of the way, it is fair to say that there are as many Spanish dialects as countries speaking the language, but these are mainly grouped in 8 categories. But first let us define the term dialect.

“A dialect is a language variety distinguished from other varieties by differences of grammar and vocabulary’.” Arthur Hughes

The Spanish dialects are assembled in 8 categories.

Castilian Spanish: spoken in most parts of Spain.

Andalusian Spanish: it is spoken in Andalusia, Ceuta, Melilla, and Gibraltar. It is thought that this dialect is the reason why the Latin American Spanish is different, they have a lot in common.

Murcian Spanish: spoken in Murcian a region in south-east Spain.

These three are considered European Spanish.

Next comes the Latin American Spanish spoken in most South American countries except Brazil were Portuguese is the official language. It is also spoken in Central America, Mexico and in the Caribbean (Cuba, Puerto Rico, Dominican Republic) with the variation inherent to each country.

The Rioplatense Spanish is spoken in Argentina and Uruguay. It has a different intonation influenced by the large settlement of Italians in the region. They also use ‘Vos’ instead of ‘tu’ for the second person singular, and the conjugation of the verbs change in the second person singular as well. For example, they say ‘tenés’ instead of ‘tienes’.

US Spanish. The US has 41 million native Spanish speakers. They mainly speak Mexican Spanish.

Last is the Equatoguinean Spanish spoken in Equatorial Guinea situated in Sub-Saharan Africa. It is closer to the European Spanish.

What Spanish Dialect should you learn?

It depends on your reasons for learning the language. For example, if you’re planning to visit Spain an interact with Spanish people, learn Castilian Spanish. On the other hand, if your travels will take you more to Argentina or Uruguay get used to the Rioplatense Spanish.

But also remember that all the different Spanish categories share the same roots. Learning one or the other will certainly score you brownie points with a specific group of people but will not prevent you from understanding and connecting with others. It is the same as when an American, a Canadian, a British, an Australian meet they are all speaking English with some variations but at the end of the day they are well aware of what’s going on.

If you do not have a specific objective in mind other than learning the language, just learn what some call ‘universal’ Spanish. You use words that are familiar to the greatest number of Spanish speakers.

This linguistically diverse variety in vocabulary and accents are the attributes that make the language culturally rich and worth exploring .

What type of Spanish are you studying? Comment below

If you want to practice your Spanish, Register to our Monthly Conversation Practice